The following homes were part of A Look Inside... A Tour of Northborough's Historic Homes sponsored by the Northborough Historical Society and the Friends of the Northborough Library in September, 2005. The photos and text are used with the permission of these organizations. 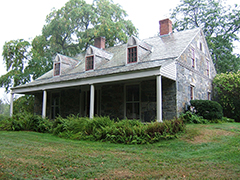 After he married Mary Williams of Northborough, Salem sea captain Edward Orne built their home in 1826 near that of her parents. Tragically, Mary died in childbirth in 1833. Stone quarried from the ledge across the road forms the mortared inner and outer walls – with loose smaller stones between – to create walls totaling 18 inches thick. The exterior displays a variety of stone colors, textures, and sizes, including slabs up to six feet long and lintels over each window, and there’s a stone barn as well. The house architecture uniquely combines Dutch-colonial style with Greek-revival details, and the spacious interior belies the name "Stone Cottage." There are two marble fireplaces, windows eight feet high with interior shutters, long porches front and rear, and a hanging staircase with an ivory "mortgage button" in the newel post at its base. With a niche in its curved wall, the staircase is identical to that of the Hadwen house on Nantucket. The home also is noteworthy for long-term family ownerships: 1838-1928 for the Fisher-Wilcox family, and more than 20 years each for the Howard, Walker, and current owners’ families. 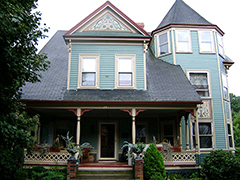 Noted Fitchburg architect Henry Francis, whose late 19th-century legacy includes numerous schools, churches, libraries, residences, and other buildings in the region, designed this Queen Anne-style home with Eastlake features for Walter and Hattie Wood Farwell in 1893. Walter was the last of several manufacturers of ornamental combs in Northborough, but while such combs may be out of style, ornamental Victorian houses like this one remain icons of that era. Five colors of paint define the exterior, with four patterns of shingles that are best viewed on the right side. A turret, cornices, porch trimmings, and unique hand-carved placards adorn the façade. Three sets of original pocket doors open to first-floor rooms from the large foyer, which has a fireplace and a stairway leading to another large foyer upstairs. One bedroom has two small stained-glass windows. The current owners have restored walls and added crown molding and medallions, but the woodwork – including built-in drawers and cabinets, hand-carved newel post, balusters, and mantel – is original. At least two mysteries come with the house: Why was a rear wing moved to another Hudson Street property in the 1930s? And who was or is the friendly ghost whose presence has been sensed by a local clairvoyant?

Northborough center’s historic district is the setting for this 15-room, cupola-topped home built by Cyrus Gale Sr., whose son Cyrus Jr. later donated funds for the town’s library. Dating from about 1860, the design blends Greek-revival and Victorian elements. The hexagonal cupola and four elaborate chimneys survived the 1938 hurricane. On the east side, the front door opens onto the entry hall and a curved staircase with mahogany banister and newel post. The original parlor’s twin marble fireplace mantels face the two bay windows – nine and a half feet high – seen from the street. Valances with a frieze of acorns and teardrops trim first-floor doors and windows. The mantels – which originally had framed coal stoves in each room – include three of marble and one of cast iron with a raised floral design and insets of reverse-painted glass. The rest are a simple wooden design. Once the home of Martin Ryan, a former postmaster, this property also has been the residence of a doctor, tortoise-shell jewelry maker, merchant, and harness maker. While updating the house for today’s needs, the current owners have respected its history and architecture, allowing it to remain relatively unchanged. 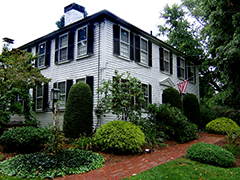 Like many New England dwellings, this house appears to have grown in stages. With the front rooms constructed around 1800, the house acquired its imposing facade, enhanced by twin chimneys rising from a hip roof and 12-over-12 windows. Inside, eight working fireplaces illustrate the evolution of style over the decades, with designs that range from simple wood sheathing to intricately carved moldings. Beginning with the 1740s, familiar Northborough surnames – Carruth, Valentine, Fay, Brigham – appear on a long list of this property’s former owners. The longest occupancy was that of Wilder M. Bush and his family, who lived here 1839-1880. He purchased the house and 25 acres, including land across the street where he launched his comb factory. In November 1906, when owners Gilman and Lena Howe hosted a meeting of local historically-minded residents, this house was the setting for the official formation of the Northborough Historical Society. Mr. Howe was elected the first president. Ruth Webb Lee, operator of a local book store and author of Sandwich Glass, lived here during the 1940s. Residents since 1985, the current owners recognize the historical significance of this property and strive to maintain its period authenticity. 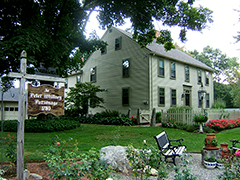 It’s still known as the Peter Whitney parsonage, probably because his legendary service as Northborough’s second town minister – with a salary paid by the town – lasted 49 years (1767-1816). The Rev. Whitney was preaching in First Parish meeting house on Fast Day, April 26, 1780, when notified that his house – just down the road – was on fire. The destroyed dwelling also had been the home of John Martyn, who served as town minister 1746-1767. But the community rallied around Whitney, his wife Julia, and their 11 children; and as Westborough’s Rev. Ebenezer Parkman noted in his diary, "a great company of people attended the raising" of the new parsonage soon after the fire. Original features in this center-chimney colonial, which is larger than the previous parsonage, include the plaster, woodwork, floors, door hinges, and all seven fireplaces. An addition on the west side pre-dates 1867. The current owners have worked to restore 18th-century authenticity throughout their home, using paint colors available during the Whitneys’ occupancy, returning the windows to six-over-six configuration, and uncovering the beams in the kitchen ceiling. A picket fence defines plantings at the front entrance, and visitors may take a self-guided tour of the colonial-style garden. 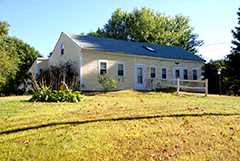 When George and Carolyn Lowe Collins bought the property in 1890, they were assessed for various livestock as well as a house and barn. The original four-room dwelling – constructed in the 18th century with posts, beams, pegs, and small root cellar – is to the left as you face the front. It has low ceilings, a beehive oven, and a gunstock beam still visible. Added in the 1890s, the newer section has two fireplaces and a full cellar. In 1910 Carolyn, by then a widow, was one of the first in town to install a telephone. Three of her daughters pursued creative work in the area: Mabel grew flowers on the farm, delivering them to Worcester for sale; Marian worked as a florist; and Cora was a milliner who took the trolley to her job at an Upton hat factory. Updates to this home reflect the evolving needs of three more generations of the family, including a descendant who is the current owner. 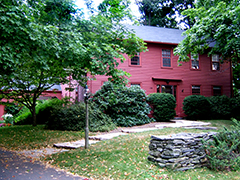 Built in 1752 by William Babcock, the original home consisted of two front rooms with two bedrooms overhead—an exercise in symmetry featured in Georgian colonials. Wide board floors lead from the front entrance to a central staircase still in possession of its original handrail, noticeably lower in height than today’s standards. The two front rooms, along with the bedrooms above, feature original fireplace mantels that were saved, although the two original chimneys were replaced in the mid-1870s. Although the 12-over-12 small-paned windows are replacements, they are in keeping with what most likely graced the original. A keeping room extending off the back is also original and rests atop the fieldstone foundation. The ceiling and foundation beams are the original sturdy chestnut. At one time, blueberry fields and peach trees flourished on the property. According to the "History of Mr. T. P. Haskell’s Place," local philanthropist "Cyrus Gale said that when he was a boy he used to come here to pick up peaches, that had fallen from the trees, for the pigs." The current owners join a long list of residents who have treasured this historic gem and called it home.